I entered one doll in the competition, a 12-inch KEN DOLL,
in the category "Mardi Gras Queens bigger than 11.5 inches"

The doll won a First Place ribbon AND the People's Choice Award! 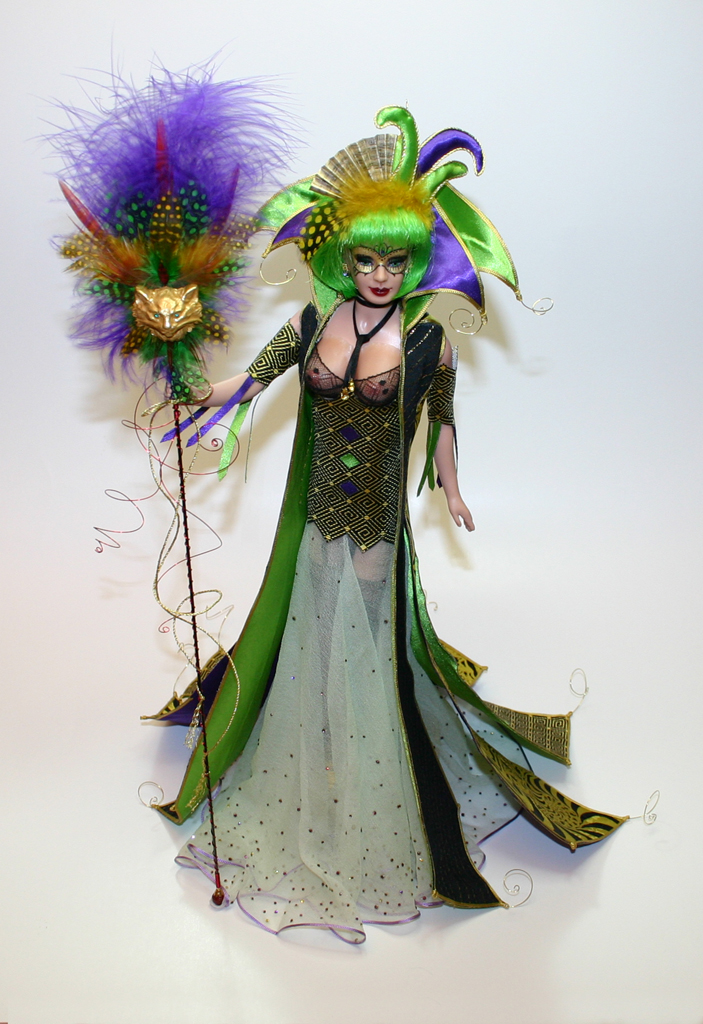 Yes, you read that right, THIS DOLL IS A KEN DOLL!


Press here for more pictures of this doll.

My husband, K.C. Healy, who is the best husband any woman could have, agreed to dress as Krewe Kween Ken for the Mardi Gras Banquet on Friday night. KC's costume won the costume prize that night!

KC was very apprehensive at first - but as the evening wore on, and alcohol loosened him up a bit, he got more and more into the "role" and even started flaunting it! Fortunately, I have proof!

THE COSTUME HE WORE WAS MADE BY THE INCREDIBLY TALENTED EMILIA SOROKO! SHE MADE THE COSTUME BASED SOLELY ON THE DRAWING I HAD OF THE WAY THE DOLL WAS INTENDED TO LOOK AND SHE HAD NO PATTERN (the doll had not been completed yet)! Em also made the coordinating outfit that I wore, a black skirt with a ruffle on the bottom and pointed panels over it.
KC made his headpiece and our masks.
KC's face was painted by Bill Smith-Jones.
These costumes are also for sale!


The photographs below are very high resolution, and there are a lot of them,
so please be patient while they load. 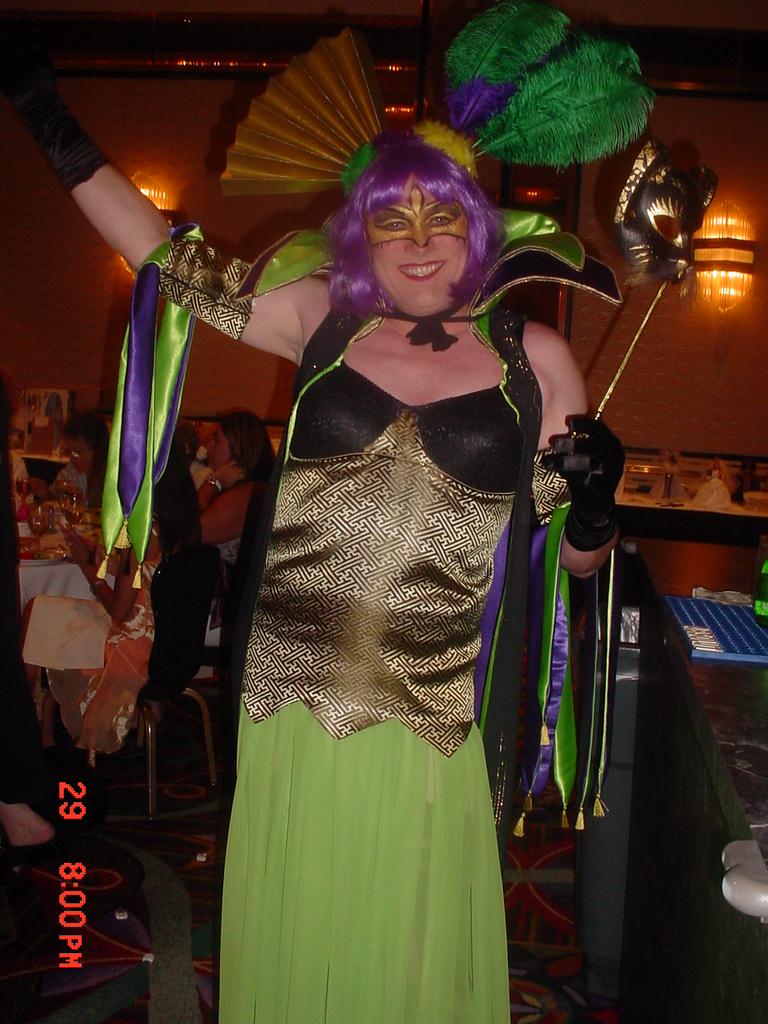 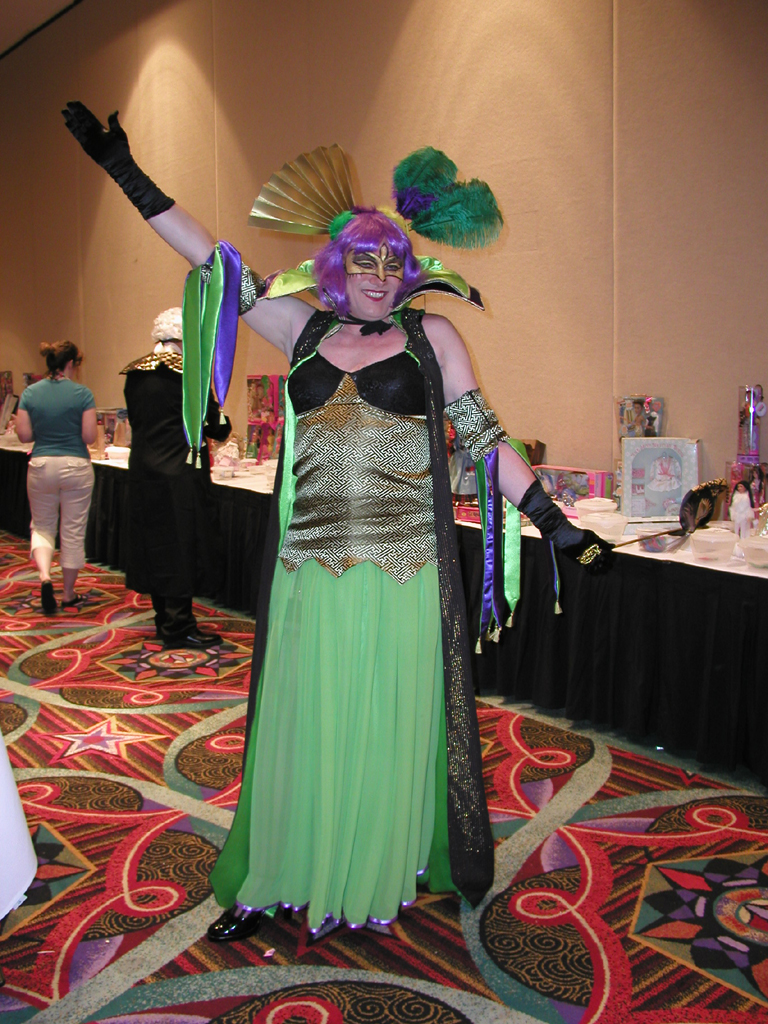 Side by side - the differences are due to changes I made at the last minute, after the costume was finished. 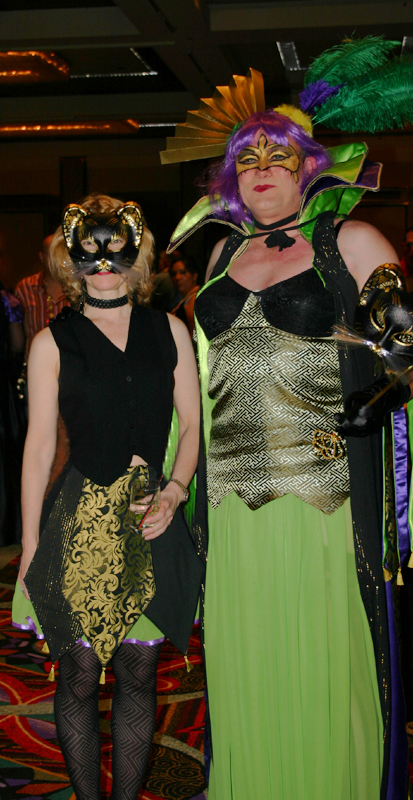 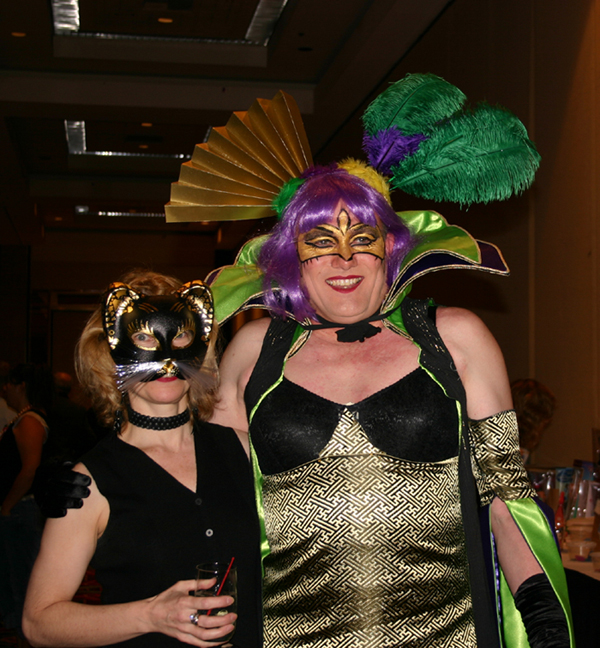 ...yes, KC DID wear stockings and heels, just like the doll! 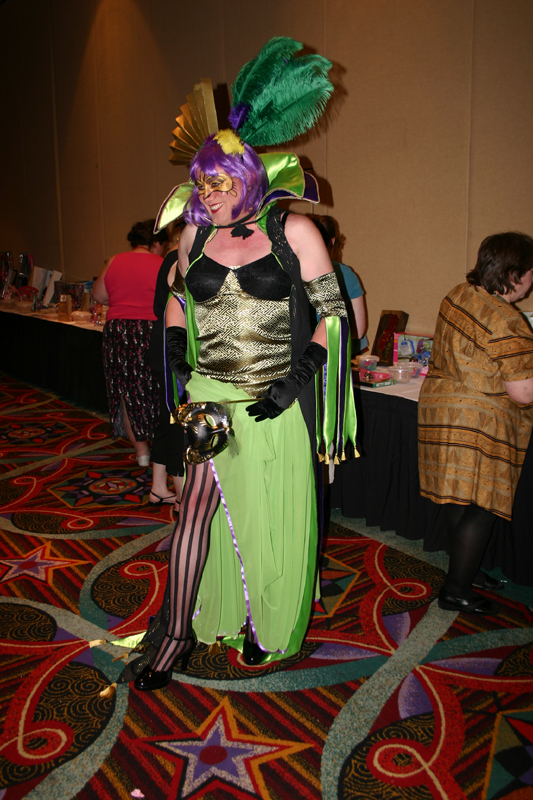 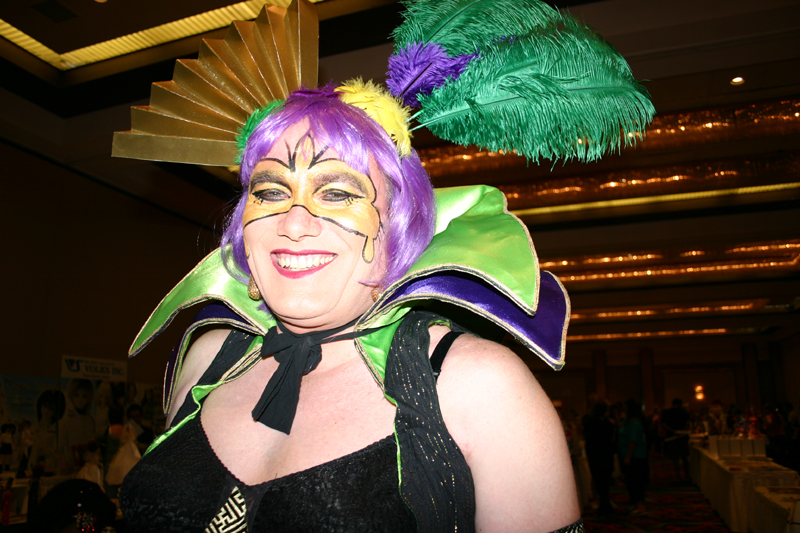 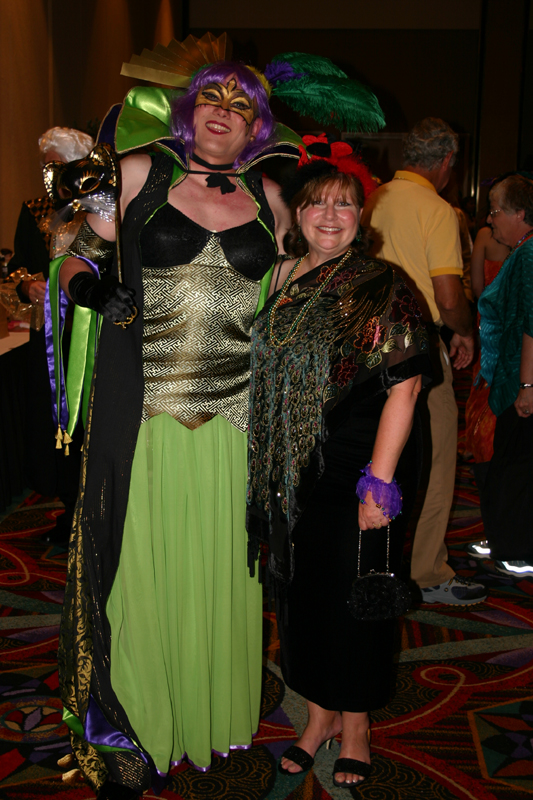 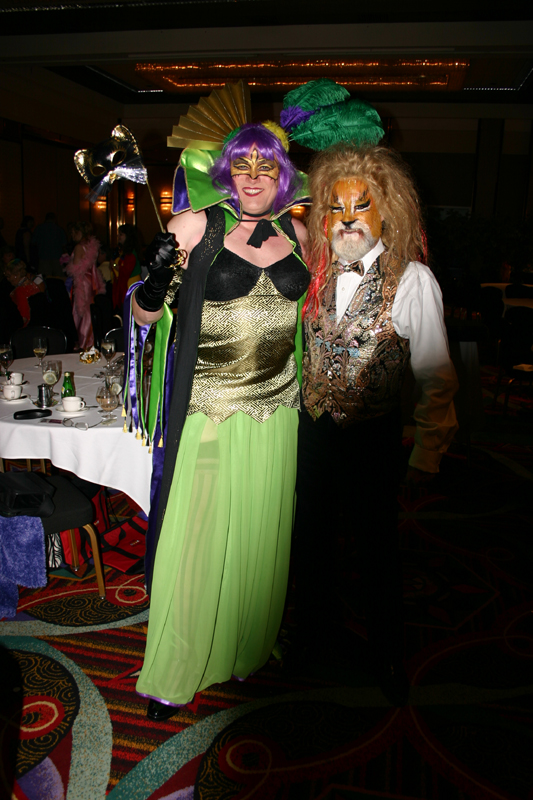 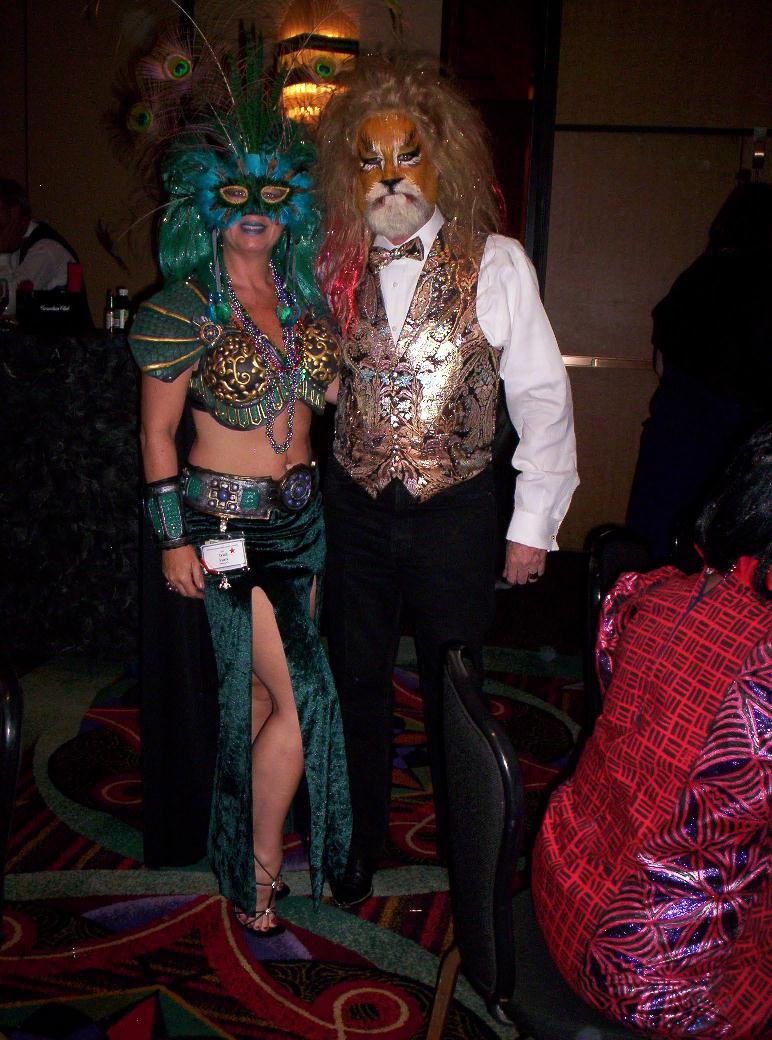 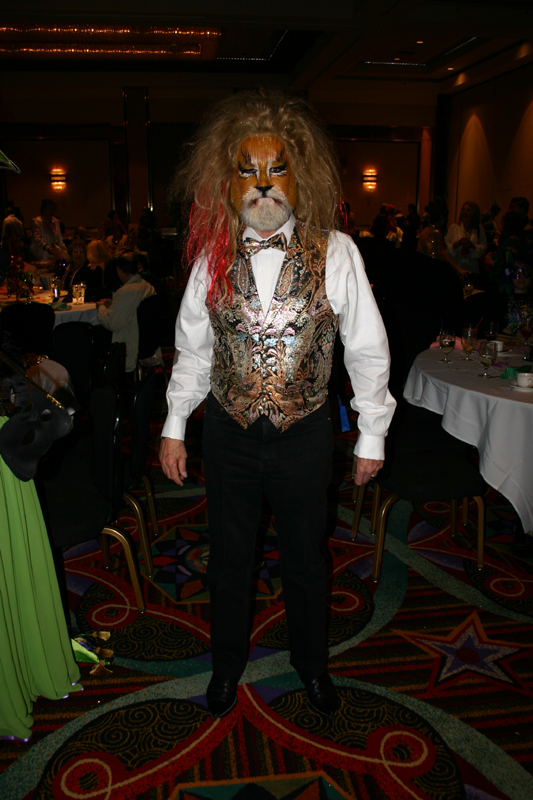 John Prewitt in another great costume 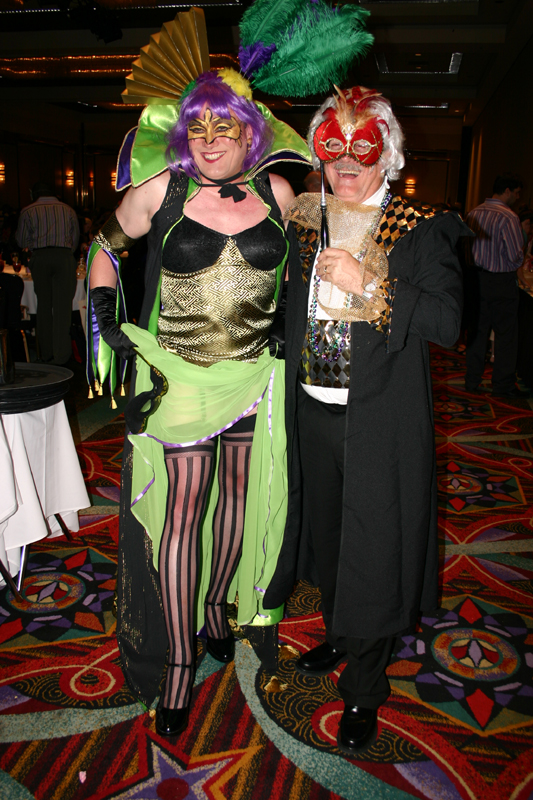 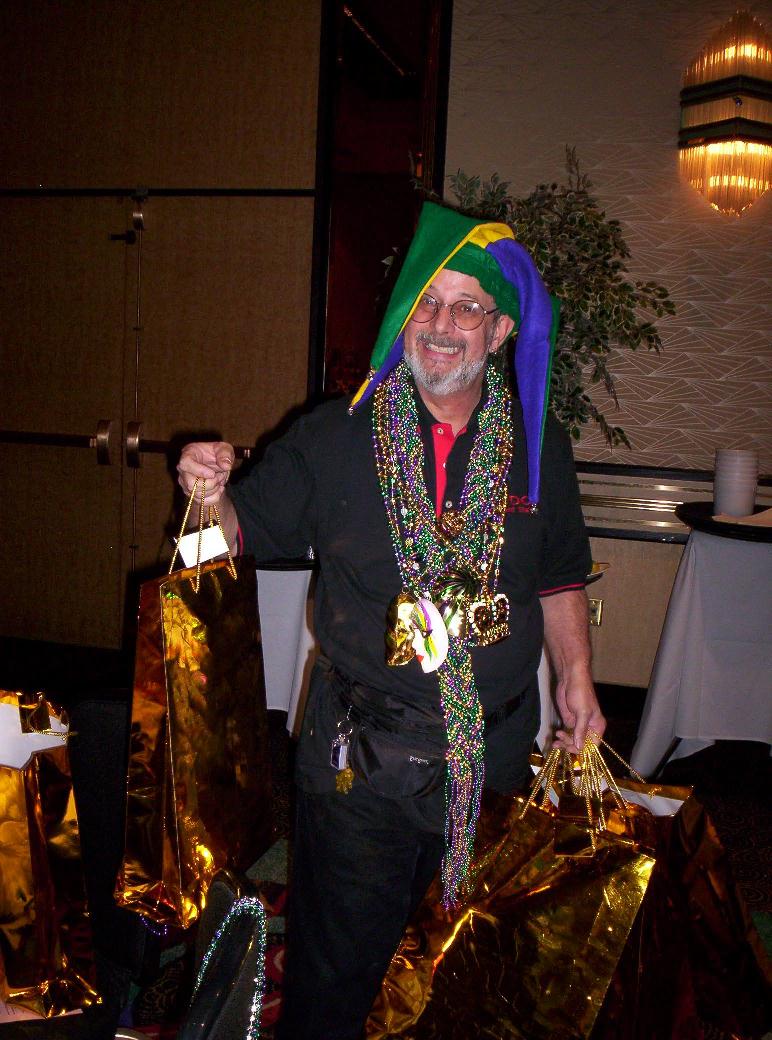 Trish and KC in the bar after the banquet 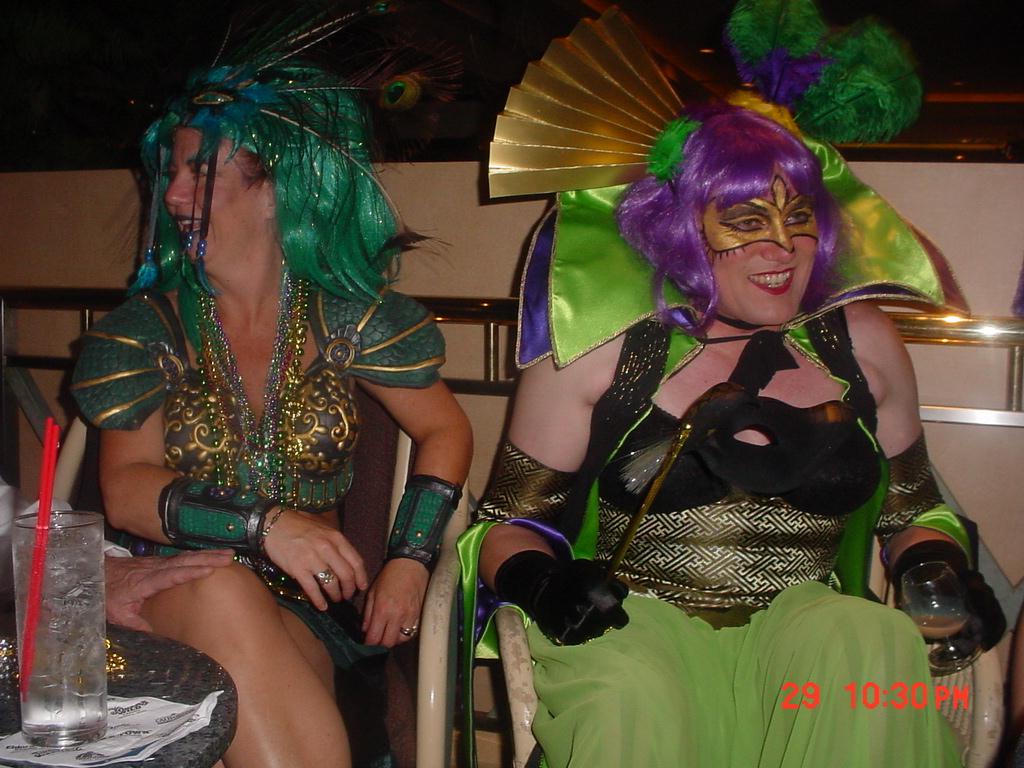 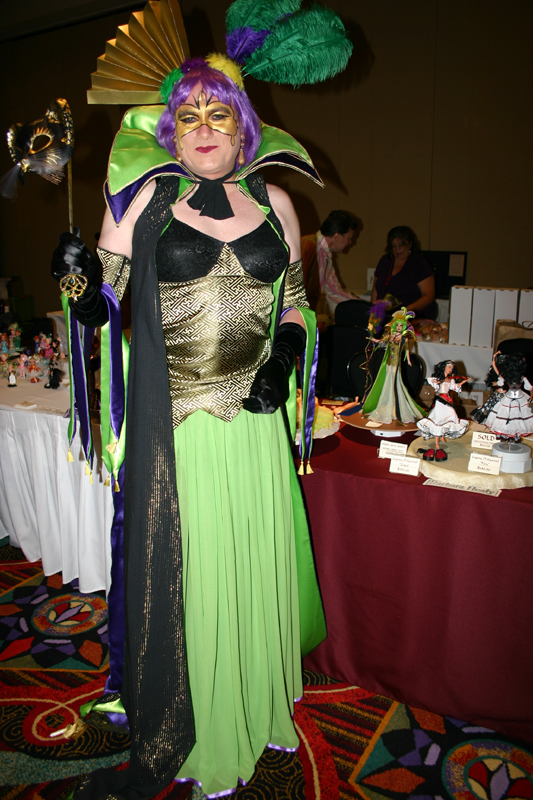 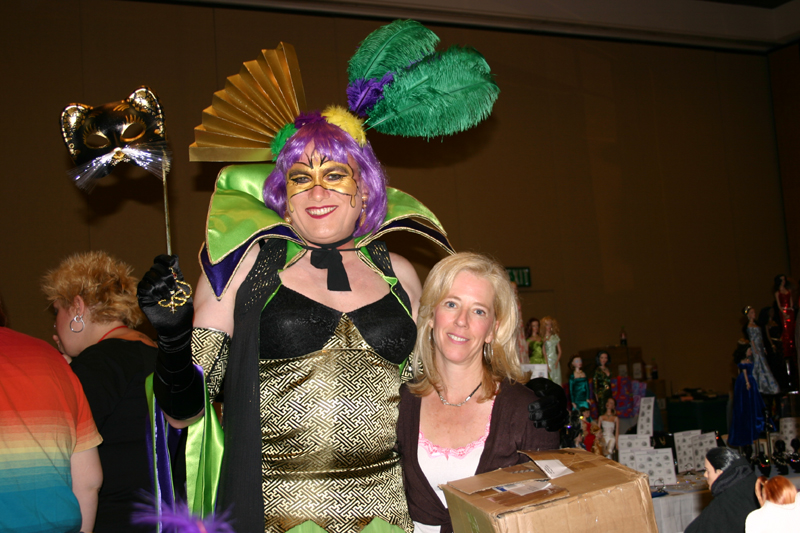 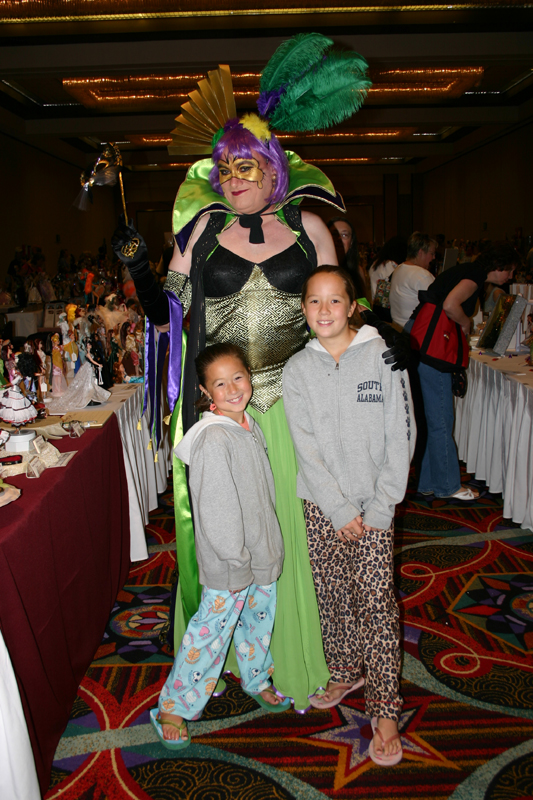 
Saturday night, the night of the final banquet, KC did NOT wear a costume, although I DID try and talk him into going as a can-can girl! I wore a red custom-made corset over a black bodysuit (you'll see why when you see the picture of the back of my outfit) and a very full black crinoline. Here are pictures of the Moulin Rouge Banquet:

KC and I (this is what KC really looks like!) 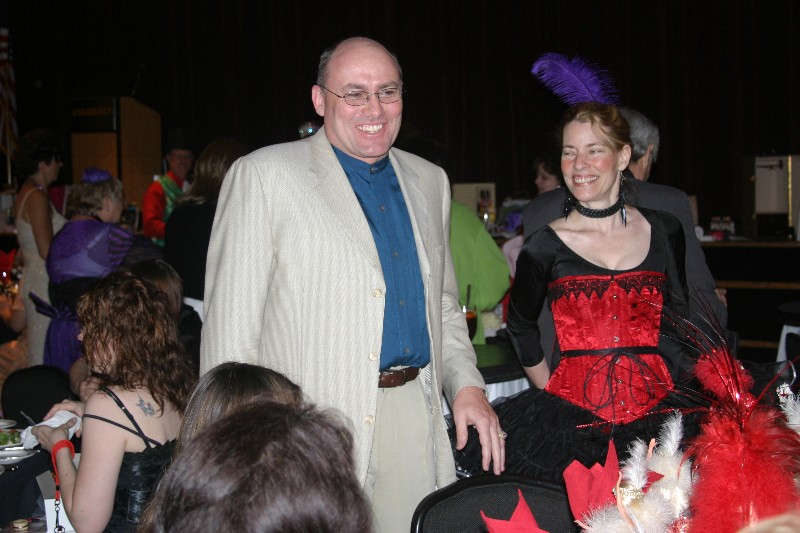 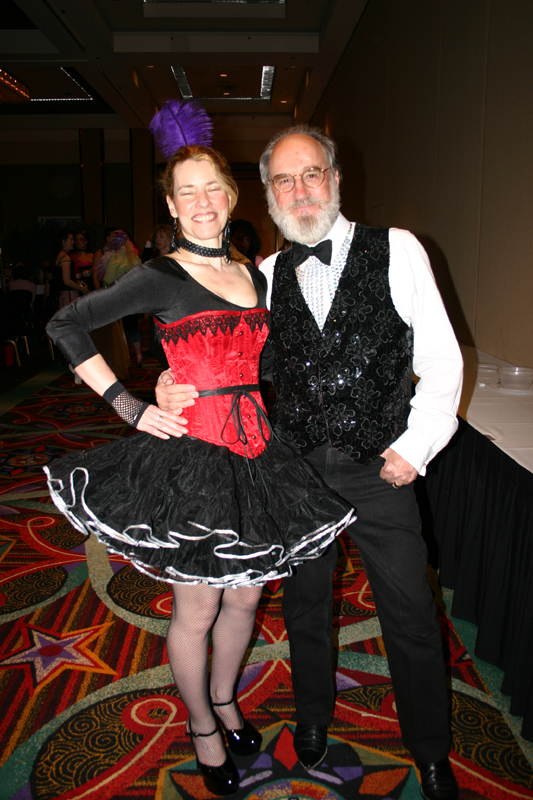 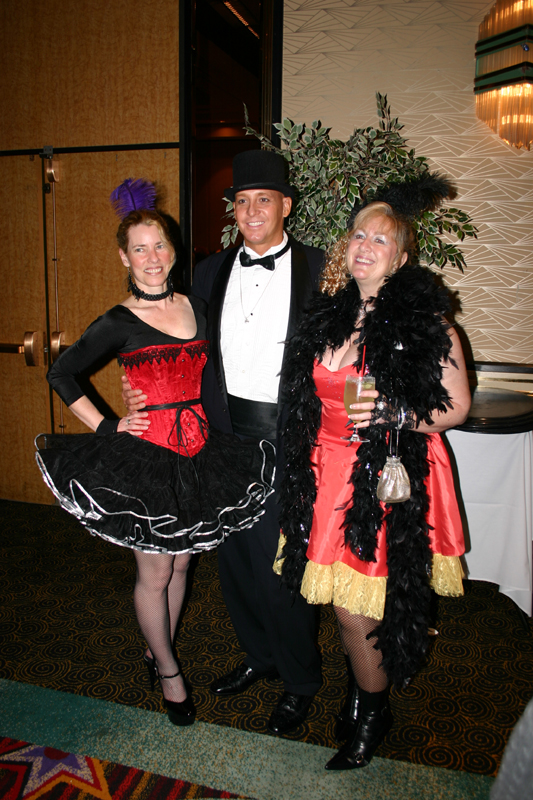 Trish's INCREDIBLE costume (which won the costume prize that night!) 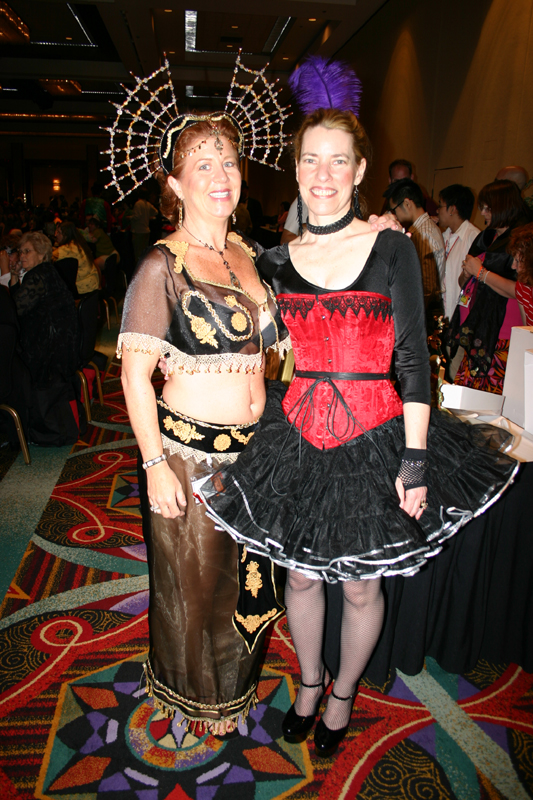 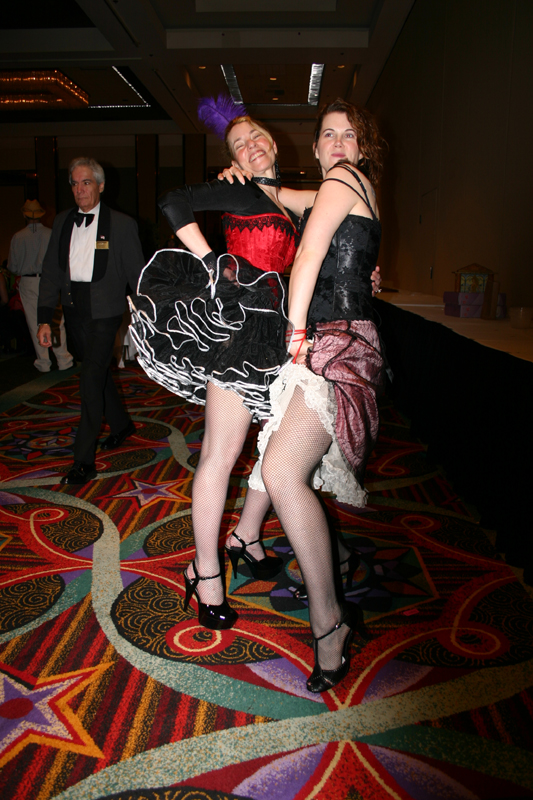 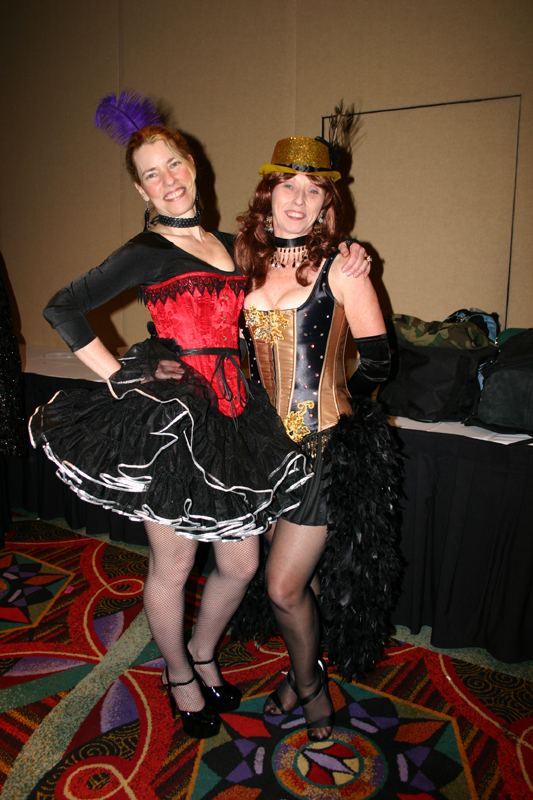 Darlene, looking like she's going to punch me, but in reality was attempting to get her leg up on my shoulder! 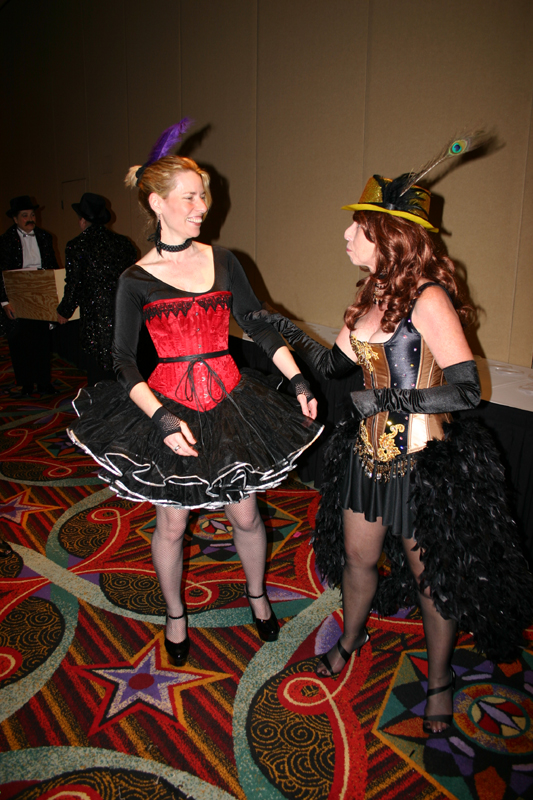 Three other interesting costumes! (please let me know if you know who these people are!) 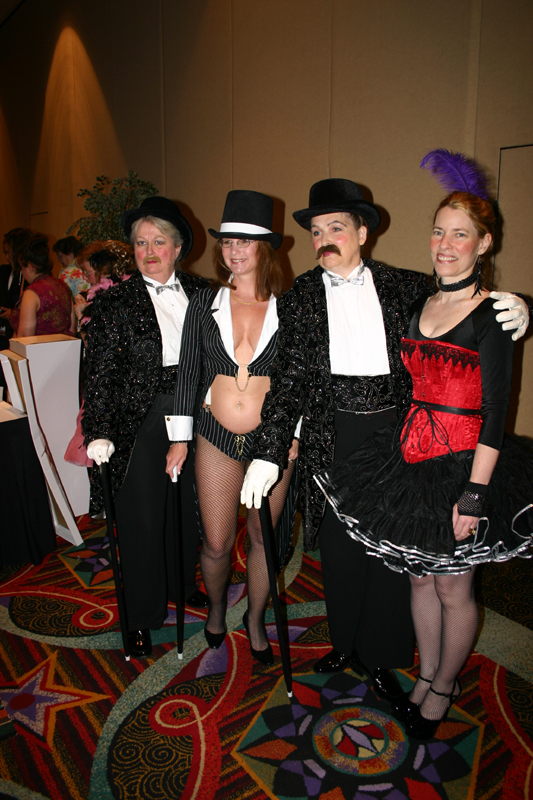 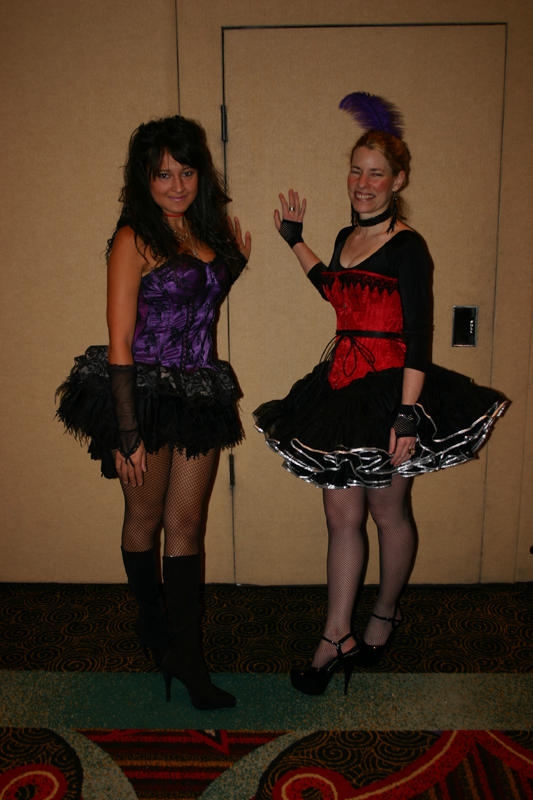 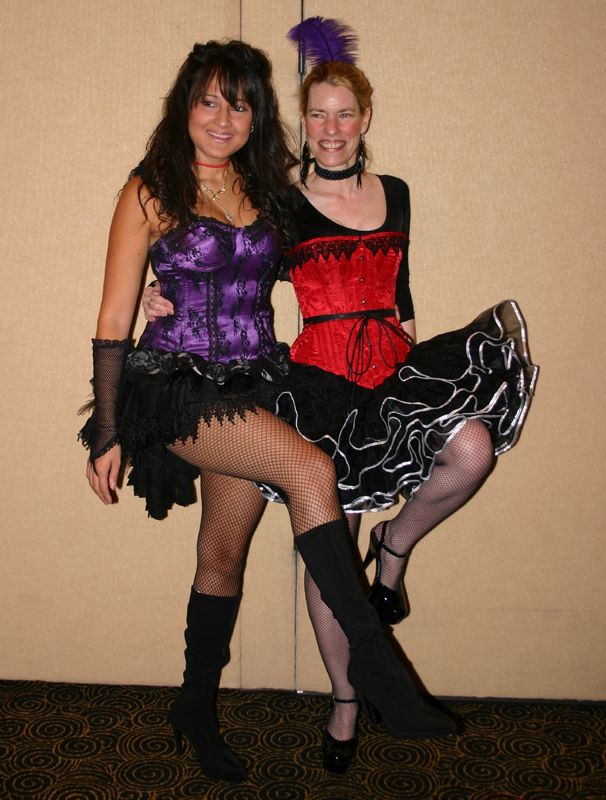 Anita and her charming husband, James 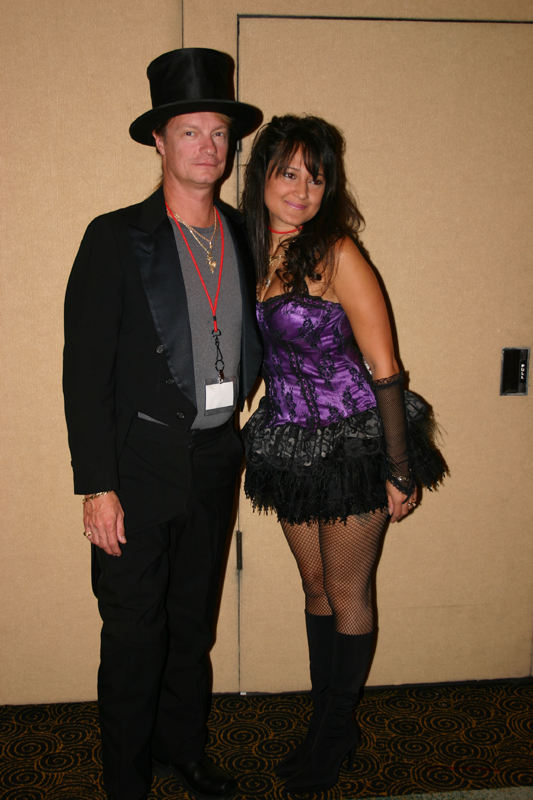 Trish and the beautiful doll whose costume was copied from Trish's own! 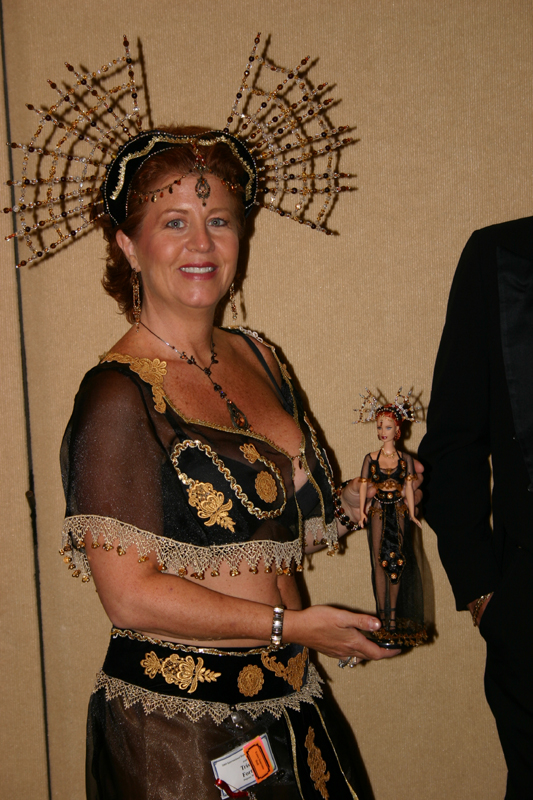 The back of my costume and, unfortunately, the end of our pictures! Because KC didn't arrive until late Thursday (we had sump-pump trouble), and he brought the camera, we have no pictures of either the Bugsy Segal reception or the Integrity Luncheon. 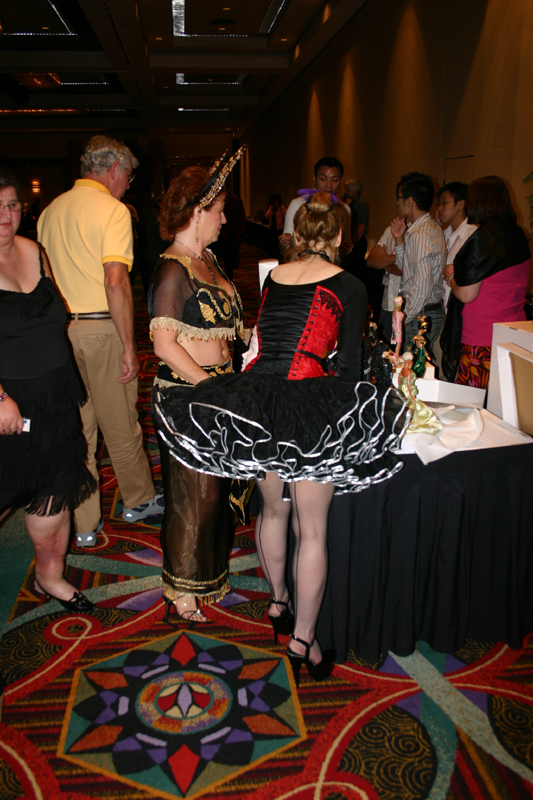 OOAKFolk, Inc., and artist Barbara Healy are not affiliated in any way with the original manufacturers of the dolls pictured in this site. No photograph, text or graphic on this site may be copied without written permission from Barbara Healy. Copyright © 2004 OOAKFolk, Inc.